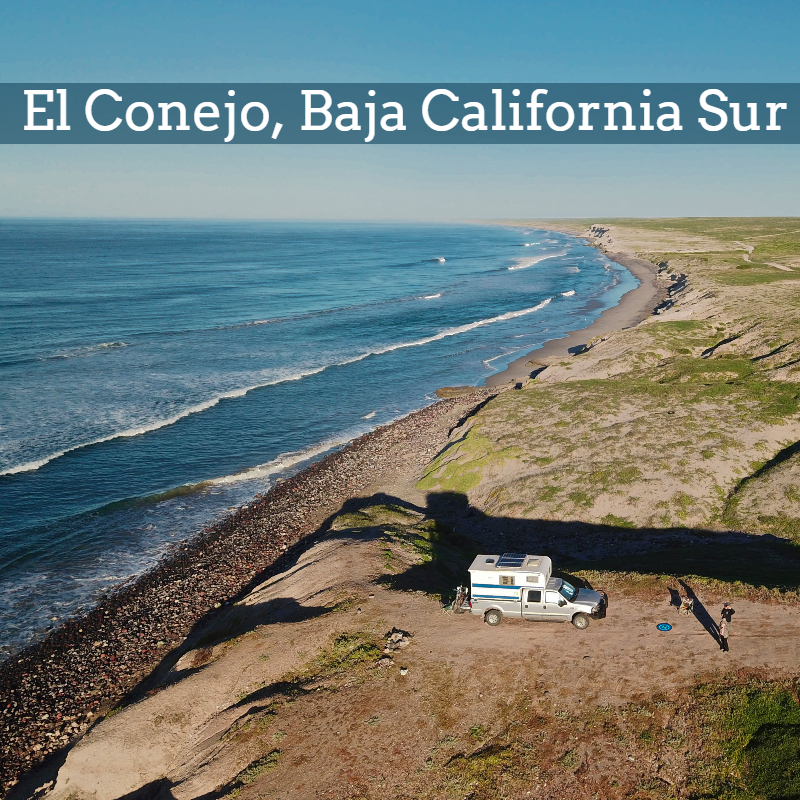 Video #10 from our Baja 2019-2020 trip in the truck camper. We leave Loreto, BCS and drive south. About 60 miles north of La Paz, we turn off the pavement. Ten miles later and we reach the Pacific coastline and the area known as El Conejo.

El Conejo means “the rabbit” in Spanish. I’m not sure why it’s been given this name. If anybody knows, do share in the comments. At any rate the two times we’ve been here we did’t see a rabbit one.

This is a popular spot with surfers who stay closer to the good surf area which is to the south of the fishing camp. Speaking of fishing: Every morning you can watch the Pescaderos launch their boats. It’s quite a spectacle. Walk down to their camp after they return and you can buy the freshest seafood! We’ll show you the lobsters we had in the next video.

The turn off the paved highway 1 is at about 24.185032, -110.945476. There is a sign but it’s kind of small and covered with stickers. The dirt road is not too bad. But it will be slow going and you may get some “pinstripes” on your vehicle from cactus and shrubs hugging the lane. I think the road could be pretty hairy after a good rain. Eventually, you’ll arrive at a “gate” that says you’re entering private property. Keep going. You’re almost there. You’ll see the fishing camp buildings and probably other campers. If you go to the south, the land hugs and arroyo and is lower. We’ve heard there are rustic showers and bathrooms available but I can’t vouch for that because we’ve never camped on that end.

Both times we’ve stayed here we parked on the cliffs to the north. Unless you go really far up the road north, there will likely be a couple of guys show up to collect a fee. When we were there I think we paid 100 pesos/night. But don’t hold me to that price. Things can change. Be careful as you do go north. The road starts out pretty solid, but gets increasingly rough and sandy. Also, be wary of spots along the cliff. Sometimes what looks like solid ground can be squishy, get stuck sand (as we learned by experience). Better to get out and walk a spot first if you’re not sure.